Director General of Guyana Civil Aviation Authority, Zulficar Mohamed has confirmed that TravelSpan Incorporated has expressed an interest in plying the Guyana route.
The travel service had operated in Guyana, providing air transport from Guyana to the Caribbean North America and even India. However, in 2008 the company’s operation collapsed. Its owners cited crippling losses and poor investment initiatives.
In 2011 a fire ravaged the Main Street, Georgetown, building that housed TravelSpan.
The company ceased operations in Guyana subsequently after. 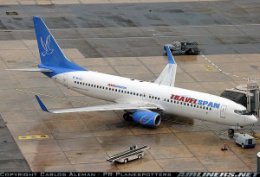 Mohamed said that the GCCAA will be meeting with representatives of the company during the upcoming week for discussions.
Earlier this week, TravelSpan Vacations Inc., announced that it is currently applying to the US Department of Transportation for authorization to begin non-stop service to Guyana and Trinidad, using a wide-body 767, effective December 2013.
TravelSpan will be joining forces with Vision airlines, which together brings more than 30 years of aviation capability, along with its fleet of three 767s, three 737s and several DORNIER 328 aircraft.
TravelSpan has been serving these markets for over 18 years and now recognizes the need for a new carrier to operate in the market based on the principals of fairness and customer service.
TravelSpan will resume its tradition of using outstanding In-Flight Customer Service Representatives for the comfort of our passengers and our flights will be staffed with both Caribbean and American Flight Attendants.
Rob Binns, former Chairman and CEO of Global Aviation – whose subsidiaries include North American Airlines and World Airways – have joined the Company in an advisory role. Mr. Binns holds an MBA in Finance from the University of Kansas and a Master’s degree in Political Behavior from Essex University in England.
The proposed flights –subject to government approval – will depart John F Kennedy International Airport for Guyana on Thursdays and Saturdays and Trinidad on Tuesdays and Fridays with additional flights for the peak season.
Schedule and fares will be forthcoming subject to governments and U.S. Department of Transportation for approval.