experiences and gifts of travel 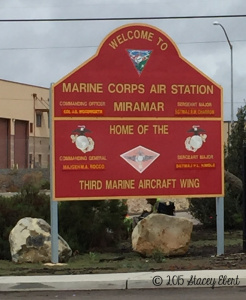 The seventh inning stretch at every Padres home game at Petco Park is complete with a Top Gun montage, high fives and thousands of people singing about a danger zone. This is a military city and I’m so thrilled to be a part of it. A few weekends ago, we went to the Navy open house and boarded the Wayne E. Meyer Destroyer for a tour. Sailors and officers lined the deck displaying details of the ship and it’s strategic abilities. It was an incredible experience. Last weekend, it was a visit to the Marine Corps Air Station at Miramar home of the 3rd Marine Aircraft Wing, the place that used to be the home of the Top Gun school. It was our first air show at a military base…impressive doesn’t do it justice. 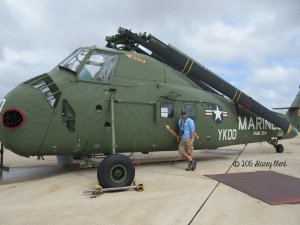 My favourite part of the event, is that it’s free and open to the public. Everyone is welcome. Of course, if you want a VIP experience or grandstand seat, there are fees; but, anyone can pack a picnic and spend the day with their family sitting on the flight line being entertained by fearless acrobats of the sky. As we entered the area, we passed fighter jets, aerobatic planes and more. Pilots, support teams, mechanics and many other military elements were ever present. Vendors of all types (food, tourism, souvenirs and military) stood parallel to the flight line to add to the grandeur of the event. The air show shared more than the magic of flight. 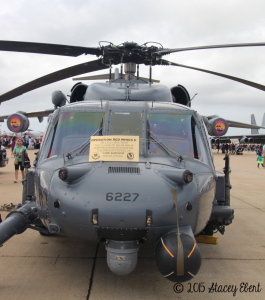 Throughout the area there were static displays of trucks and tanks, helicopters and planes, and equipment and memorabilia of the military’s past. There were military men and women (including Wolfpack pilots and Navy Seals) available to explain everything, speak with, thank and answer questions.

As we wandered past rutters and wheels, propellers and people, the boom of Explosive Ordinance Disposal unit’s planned explosions competed with the roar of jets overhead. One time I looked up and there was a plane carrying a dangling humvee through the air, followed by another that the line dropped from within held ten men. I’m not sure if it matters if you see something like this every day or once in a lifetime…technology, skill and courage continue to amaze me.

This year’s theme for the San Diego Air Show was ‘A Salute to Veterans and Their Families’. Fully acknowledging sacrifice and support of military families and the long time relationship with the city of San Diego, the spectacle of fast flying formations blended with choreographed sky high maneuvers left mouths agape and eyes wide. According to their program, the annual three day event typically draws more than 500, 000 attendees each year.

What is a fun gift?

Wrap yourself up in the Boyfriend Body Pillow. This boyfriend arm pillow is a soft and cozy body pillow that resembles the torso of a man with a comforting arm that cuddles and holds you throughout the night. Feel safe and warm in his embrace while comfortably resting your head on his chest.
This fun and cozy snuggle pillow is great for people whose partner is away on military leave or work absence. Singles, who wants to feel the touch of a man, without actually having to be with one, love it too.
This novelty pillow makes a great gift for a friend or relative with a good sense of hum…

@Travel Italian Style: A2 I like to get friends and family small but fun gifts that are easy to take home! Postcards, stickers, jewelry, etc! #TRAVEX Wed, 7 October 2015 09:09 PM