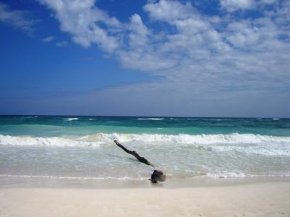 Cancun is famous for it white sand beaches and azure ocean (Photo: mexique cancun image by foxytoul from Fotolia.com )

For centuries the beaches at Cancun were simply long stretches of pristine white sand visited only by Mayan fishermen and an occasional Spanish explorer. But in the late 1960s, the Mexican government embarked on a major tourism development project and launched Cancun on a path that has taken it to world renown as a tropical destination. The resort can be crowded or quiet, expensive or affordable, balmy or steamy, all depending on the calendar and the informed choices visitors make before heading off to that relax on that white, sandy beach.

Two considerations rule when to go to Cancun-weather and price. High season, the costliest, runs from mid-December to March and includes spring break when thousands of US college students descend on Isla Cancun and the hotel zone. Low season, the cheapest, runs from May to November and coincides, for much of that period, with the rainy season and high summer temperatures. Shoulder season, defined as early December and the month of April is a good compromise, good weather and low hotel prices. Mid-week travel also offers smaller crowds and lower weekday room rates.

Cancun is generally balmy year round, but the humidity climbs in mid-summer and brief thunderstorms erupt in late afternoon. In the winter, nights can be jacket- or sweater-chilly. The Caribbean hurricane season extends from August to October-if a major storm is brewing before you depart for Cancun track it carefully and consider canceling your plans if it appears to headed to the Yucatan peninsula. Cancun hotels, for the most part, are built to withstand hurricanes, but evacuation is likely given the resort's sea level location and flights will be suspended. In 2005, Hurricane Wilma struck Cancun-the same year Katrina devastated New Orleans-with winds up to 185 mph. The death count was low, just four fatalities, but Wilma left a lot of damage in her wake and traumatized visitors and locals alike.

A rental car is not a necessity in Cancun since the area is well-served by public transportation and taxis. Rent a car for a day for excursions to area attractions and Mayan ruins, or take a day trip tour on an air-conditioned bus. Package tours to Cancun usually include airport transportation, but, if not, travelers can book airport transfers online at the official airport website. Groups should weigh the cost of hiring a private car shuttle, priced per vehicle not per person, compared with the total per-person price on a shuttle bus.

Cancun's beaches are beautiful and the turquoise waters inviting, but treacherous currents and undertows on some stretches of the beach can pose a danger to even the strongest swimmers. Pay attention to the flags atop lifeguard towers-red means it is dangerous to swim, black means it is too dangerous. Use caution at night, especially in popular, nightclubs-keep your eye on your cocktail at all times and never flash large amounts of money. Leave expensive jewelry at home and keep valuables and important travel documents under lock and key at the hotel-either in the hotel's reception area safe, or an in-room safety deposit box.

What are traveling tips for those going to Cancun, Mexico?

1# Don't drink the water even if the hotel has a purified water system. It tastes funny. Mexican bottled water... MORE?

@Calforex-Retail: This week is all about Cancun Mexico! Stay tuned for tips and tricks to make the most of your vacation to Mexico. #mexico #cancun #travel Mon, 12 October 2015 05:40 PM