Summer in America: 10 Tips for Visiting Brits | Mind The Gap 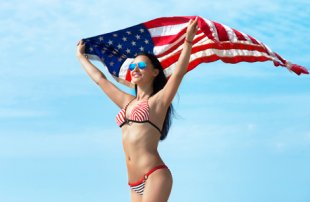 Most Brits in the U.S, will, at some point, have summer guests visiting from the Mother Country. While expats have become (somewhat) accustomed to life here, it’s often surprisingly alien to our visitors. I chatted with folks from the Brits in the USA Facebook group and came up with these recommendations for steering guests in the right direction.

1. Before you even set foot on the proverbial tarmac, have your host’s full street address to hand (i.e. not in a suitcase) to complete the immigration paperwork. Even if you’re being met at the luggage carousel and whisked straight off to the house, you will need to supply an address for the duration of your stay in the U.S. “Joe Bloggs, Kansas City” will not suffice.

2. Purchase substantial medical insurance. It’s hard for Brits to grasp just how expensive medical treatment here can be. Here are a few real numbers – according to the Healthcare Blue Book, a broken leg (femur) will set you back about $9, 500, an appendectomy around $10, 000, and even a strep throat test will cost between $74 and $138 depending on who performs it. Bear in mind also that you may have to pay first and apply for reimbursement when you return to the U.K. so you should have access to funds.

3. Don’t bother bringing toiletries; they weigh a ton, and we have them all here. Unless you have a medical need, it’s a waste of baggage allowance carting that stuff over here. If you insist on providing your own rather than using your host’s, it’s much cheaper over here and they sell the same stuff for the most part.

4. Leave space in your suitcase for the whole new wardrobe you’ll be buying. Most Brits I know go berserk in the shops when they’re over here. Clothes are much cheaper (on the whole) than in the U.K. and my guests not only renew their entire wardrobes, they buy a year’s worth of birthday presents to boot.

5. It gets hot, and the sun is strong in many places in the U.S. Even if you’re in a fairly northern city like Chicago, its latitude is 42 N, while Venice is 45, Marseilles is 43 and Bordeaux is 44. (To give you a yardstick, Leeds is 53.7N) If you wouldn’t think twice about slapping on sunscreen in Europe, don’t forget to do the same in the U.S.

Once your gusts are settled in they’ll need a few more tips. While we could write reams on the subject, some of the more important ones are:

6. Don’t start a discussion on politics, religion, guns, the number of Americans who don’t have passports, obesity in America or war. While many Brits can have heated discussions about such subjects and then have a pint with their debate opponent, Americans generally don’t do this, especially in social situations with people they hardly know.

8. When shopping, the price you see usually isn’t what you’ll pay. Sales tax (which most states have) isn’t included on the sticker, and differs from state to state. And no, there isn’t a tourist tax refund like with V.A.T., although if you are shipping back to the U.K. you may not have to pay tax. (Compare the tax savings to the cost of shipping and customs duties, as it may not be worth it.)

Camp America | Tips For Getting Placed

@NOMADasaurus thanks for the follow, in two weeks we're heading down to South America. Any travel tweeps top tips would be welcome! #travel Mon, 12 October 2015 08:06 PM