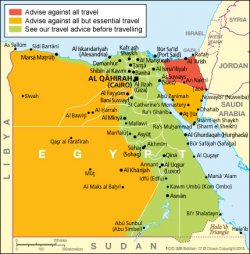 There is a high threat from terrorism.

The Foreign and Commonwealth Office (FCO) advise against all travel to:

The FCO advise against all but essential travel to:

The area to which the FCO advise against all but essential travel does not include the tourist areas along the Nile river (eg Luxor, Qina, Aswan, Abu Simbel and the Valley of the Kings) or the Red Sea Resorts of Sharm El Sheikh and Hurghada.

Over 900, 000 British nationals visit Egypt every year. Most visits are trouble-free.

Terrorists continue to plan and conduct attacks in Egypt. Since 2013, attacks have mainly targeted the security forces, their facilities and other government buildings. You should take great care near these places. There have been threats to western nationals, institutions, and businesses posted on websites and social media. Foreigners could be targeted in tourist resorts or other places. Attacks could be indiscriminate and may occur without prior warning.

There is a threat of kidnapping, particularly in remote desert areas. On 22 July 2015, a foreign national was kidnapped in the western desert. He was murdered in August 2015. A terrorist group has claimed responsibility for his murder.

The FCO is constantly reviewing the threat to British nationals from international terrorism and will reflect any credible threats in this travel advice.

Enhanced security measures are in place to protect the Sharm el Sheikh and Hurghada resort areas. Security forces are situated at the international airports, at check points around the perimeter of the towns and throughout the Governorates. Routine security checks are being performed on entry into the airport and the police are carrying out vehicle checks in the towns.

@Saraphina: You know you've lived that travel life when you've got a favorite gas station #QuickTripforthewin Thu, 8 October 2015 02:07 AM