Why I hated my visit to the Egyptian Pyramids 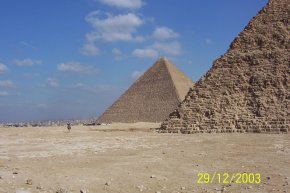 Like many people, Egypt is somewhere I had wanted to go for years. I was fascinated by Ancient Egypt at school, and a visit to the Egyptian Pyramids always featured prominently on any list of my must see destinations. I was very happy when I was able to fit it into my six week around the world tour in 2003/4. Unfortunately, all these years of waiting to see the magnificent pyramids did not prepare me for the disappointing visit which was to eventuate. I would never have thought that I would end up hating Egypt.

We spent three nights in Cairo, and it is three of the worst nights I have spent anywhere. We were hassled and abused pretty much constantly. This dream destination I had been imagining, turned into the worst place I have ever been. 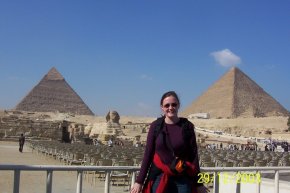 After our wonderful experience being scammed in Bangkok, we had a 12 hour transit in London before arriving in Cairo airport. It is still to this day, the worst experience I have had in an airport, especially as it was after many hours of travel.

Firstly, many airports have people trying to sell you things like transfers and hotels. However, here at Cairo Airport, they were actually allowed in all areas of the airport. We were being hassled before we even made it through immigration, let alone to our bags! We were exhausted and there was someone constantly hassling us while we lined up for visas, then passport control and then to get our bags. Speaking of our bags, local people were at the baggage carousel, taking bags off and just walking away with them! We were lucky we got through immigration when we did, as someone was just walking off with our bag at that moment!

Passport control was dodgy as well. The guy who stamped our passports kept them, and told us to keep going! He said we would get it when we flew out! No way we were leaving our passports behind, so we waited and kept hassling him, while he processed other peoples. When we said we were going to ask someone else, he gave them back straight away. It was very strange.

RT @clair58to: @globeandmail why is the federal government responsible for your choice to travel and work in Egypt ??? Your choices right. … Tue, 13 October 2015 10:18 PM