If these walls could speak, they’d never stop jabbering.

They’d tell stories about construction and destruction, power struggles, and the gradual process of modernization.

If Azerbaijan could recommend a destination, it would be Baku’s Old City.

Situated along Azerbaijan’s eastern coast, Baku serves as the nation’s capital city. Steeped in history, the metropolis is over 500 years old. However, not prone to remaining static, the city has moved along with the times and holds a number of modern features including massive skyscrapers and an efficient metro system.

With all of the development, rest assured that Baku hasn’t forgotten its roots. Whether visiting a museum or buying handicrafts at an open-air market, Azerbaijan’s traditional culture is never too far away.

And to explore some of the nation’s ancient architecture in the midst of a modern capital, you need not look further than Baku’s Old City. 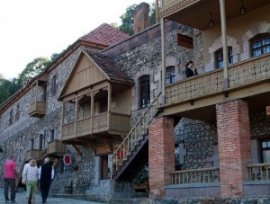 Situated at the center of town, the Old City is comprised of a series of neighborhoods, all held within the confines of the ancient fortress walls. Deemed a UNESCO World Heritage Site in 2000, many of the stone structures are still open for exploration.

Look to spend the vast majority of the day wandering along Baku’s cobble stone streets.

As perhaps the most architecturally-noticeable structure in the Old City, the Maiden Tower stands as a 97 foot (30m) high stone cylinder. Known locally as Gyz Galasy, the ancient structure has both an unknown date of construction and a mysterious function.

No matter what it used to be, the Maiden Tower is now one of the Baku’s essential attractions. Visitors can enter the structure and climb to the top, getting an elevated perspective of the Old City. In addition to the panorama, the tower also holds a cultural museum, offering an insight of local history as well as an opportunity to buy a souvenir.

Expect to pay a Baku’s essential attractions. Visitors can enter the structure and climb to the top, getting an elevated perspective of the Old City. In addition to the panorama, the tower also holds a cultural museum, offering an insight of local history as well as an opportunity to buy a souvenir.

Expect to pay a $0.60US entry fee to gain entry to the tower.

The Palace of the Shirvanshahs

Built in the 15th ce.60US entry fee to gain entry to the tower.

Built in the 15th century, the Palace of the Shirvanshahs is perhaps the most intriguing architectural structure within Baku’s Old City. As a showpiece of the World Heritage Site, the palace has been well taken care of and stands today as it did in its heyday.

Visitors planning on entering the palace should expect ample opportunity to wander around and explore. Unfortunately, beyond the structure itself, there isn’t a whole lot going on. Tourist information is scarce and there are no displays of ancient artifacts.

Baku’s Old City is open to be explored year-round. Don’t limit yourself to travel at any particular time of year.

What travel accessories can one take on the plane?

When boarding a plane, one can only take so much luggage with them. Sample and plane sized personal products, books, hand held entertainment, magazines can all be taken on a plane.

How To Buy Travel Accessories

Planning for a vacation can be quite stressful as there is always a long checklist of things that need to be done. One important task is deciding what you need to bring along with you on the trip. Below are some guidelines of how to choose what accessories you may need and where to purchase them.