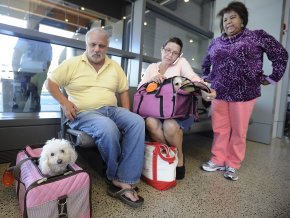 Tony Corrao and Victoria Torres never imagined they’d end their Maine vacation stuck at the Portland International Jetport, unsure how to get themselves and their two little dogs home to Florida.

The Fort Myers couple say they were removed by two air marshals from a JetBlue flight Friday morning because the carrier for one of their dogs wouldn’t completely fit under the seat in front of them and stuck out a few inches, even though the 13-pound dog had flown to Maine 10 days earlier in the same pink carrier without problems.

“I’m in disbelief, ” Torres said Friday afternoon, standing in the terminal. “I can’t believe I am going through this right now.”

Corrao and his wife said the size of the carrier had not been a problem when they flew with the dogs – Nena, a poodle-bichon frise mix, and Princess, a 9-pound Chihuahua-Shih Tzu mix.

At the Fort Myers airport on their journey to Maine, Corrao said JetBlue employees told him that the carrier for Nena was within the airline’s size specifications and the dog was allowed on the flight. Corrao said they have flown with the dogs on two other vacations without incident.

Corrao, Torres and a friend, Mayra Cuevas, paid around $1, 000 for three airline tickets, plus a total of $400 in nonrefundable pet fees to bring Nena and Princess on the flights to and from Maine.

The three spent 10 days in Maine, traveling Down East to Milbridge and back to the Portland area.

But when they boarded the flight headed home Friday, Corrao could not get Nena’s carrier to fit entirely under the seat in front of him. On the way to Maine, the flight attendant had Corrao fit the carrier sideways under the seat, by his feet, and that was fine, he said.

But this time, the flight attendants told him the carrier had to be completely under the seat or Nena wouldn’t be able to fly. They moved Corrao to a different aisle with more room, but Nena’s carrier still didn’t fit. The airline then offered to put Nena in a smaller carrier, but it was too small and she wouldn’t have been able to move around, Corrao said.

Corrao, who is retired, said he was trying to cooperate with the flight attendants to find a solution when he got into a testy exchange with a supervisor, who insisted the dog carrier had to be forced all the way under the seat, or he’d have to get off the plane.