Me, the Solo Female Traveler in Indonesia

As a female traveler, I know that it normally scares my friends and families out about traveling around the world, what more traveling solo around. But another thing about life is that sometimes you need to do things that defy the norms and practicalities, one just have to do it sensibly. So when I told them that I plan to travel in Indonesia alone, the immediate responses were it is not safe, or it is dangerous, I heard about this case in the media or newspaper, I heard this friend mentioned about dangerous activities there or hearsay about those who prey on solo travelers.

Now that I have been there and back again, I can safely tell you it is not true. Though I can only vouch for Java island, which I had traveled from east to west through trains and buses and on foot, I must say so far I have never really felt threatened in anyway.

But safety assured, there is only one gripe in my travels in Indonesia. There is almost always some touts out there who is trying to earn some extra money from you, regardless whether they deserve it or not. 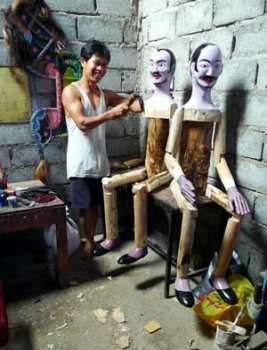 This is especially so in tourist packed places like bus or train terminals, tourists attraction and popular tourist hangout places.

Do not worry though as they are not out to bring you harm, so if you ever fall prey to any of them, the most is you lose some money but gain some life lessons. Like my case which I ended up paying premium air-conditioned price to a guy who promised me that the bus is going direct to Surabaya to end up being packed into a non air-conditioned bus who takes thousands of stops and detours before reaching Surabaya doubled the time later. At that time yes I lose the worth of money paid, but I gained a valuable lesson to be smarter next time and I have strengthened my patience and positivity muscle somewhat from this exercise!

Of course don’t let all this gripe of mine bring you down, these are the things that only happened 10% of my time in my entire one month backpacking trip in Indonesia. The rest of the time I have met some tremendously good people and generally nice people.

I met a wonderful host in Purwokerto, who took me in at last minute, introduced me to another friend, brought me to many adventures, drove me to the bus station and even make sure I enjoy the rest of my trip in Java.

Then I have also met another big-hearted host in Wonosobo who took me and few other couchsurfers in, fed us and make sure we have a good time, and I was even took to the bus stop by a fellow local who is genuinely very concerned with me going off alone.

@Fliss Hoad: Any suggestions for affordable digital detox retreats for inclusion in a travel sidebar in respected online magazine? #journorequest Wed, 7 October 2015 07:10 AM