“The more I sit in an office, the more I want to be location independent. … I feel this need to travel more, to explore, and not be tied to an office in Minnesota.”

In my last post, I told Sophia how she can Today I’m going to describe how I became location independent — a term that means “I can work from anywhere on Earth with an Internet connection.”

Q: When you came back from two years abroad, how did you start earning money again?

I assumed I’d get a “traditional” office job. (Haha! I could NEVER suffer though one of those again!) 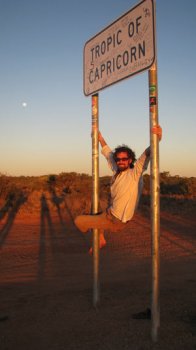 Before I launched my two-year round-the-world trip, I hemmed and hawed about how to explain a two-year gap on my resume.

I probably delayed the trip by a year, under the guise of “I’d just like to save a little more, ” because I was worried about how to explain this gap.

I’d be justified in worrying about a gap if I sat in my pajamas on the couch all day. But I did something kick-a$$.

I prominently display those two gap years on my resume (which I keep updated, even though I’m not looking for jobs). I’m more memorable than 99 percent of the other candidates who have taken the conventional path.

I also note the skills I developed through my two-year trip: like the ability to negotiate in 120-degree heat with someone who doesn’t speak your language.
If I was hiring someone, I’d want a radically self-reliant go-getter on my team. Someone with chutpah. Someone who’s done something awesome.

Q: Were you planning on looking for another journalism job?

I prefer to pave my own path and live on my own terms.

In the year 2011 alone, I took 5 trips to New Orleans, spent one full month in New York, 10 days camping in Nevada, 10 days in the Caribbean, one week on Anna Maria Island in Florida, four days in Los Angeles, three days in St. Louis, two days in Sacramento, dropped by my hometown of Cincinnati and my former home of Denver-Boulder, spent a weekend in Chicago, and went to a festival in Tampa. I couldn’t have done that if I had limited vacation time.

Q: Did you know you wanted to be location independent when you came back?

I had the “anti-dream.” I didn’t dream of being location independent, per se. I recoiled at the alternative to location independence. I shuddered at the thought of needing to “put in a request for vacation time.” Yeech!
Before I traveled, I worked at a newspaper and LOVED it. I wore flip-flops into work and I danced to people’s ringtones. It was that type of place.

Just discoverered a wonderful service provided by @MertonMencap - Independent Travel Training - fantastic idea for those with #dyspraxia Wed, 14 October 2015 11:19 AM