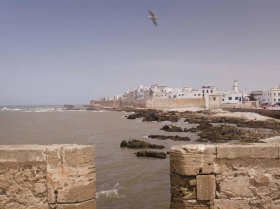 Essaouira is pronounced es-Sweera in Arabic. Say it long and slow and it sounds like the tangy sea breeze that whistles through the araucaria trees, narrow alleys, and historic seafront fortifications of this Moroccan coastal town.

Until Essaouira, my abiding memory of Morocco was of a surreal encounter I had many years ago, as a novice shopper in the Marrakech souk. I had made the mistake of idly picking up a small mirror encased in studded brown leather. I quickly replaced it, I didn't even like the thing, but the stall-holder wrapped it in newspaper and followed me around for the rest of the morning. I should have just bought the mirror of course, but I had already bought under pressure and had a confused sense of needing to draw the line. Guiltily, I didn't feel able to ignore my pursuer completely but, clearly, my apologies and rising hilarity at his persistence were not the right approach. Occasionally I'd think I'd lost him, only to have him leap out again from a side alley. I was in turn embarrassed, infuriated, bewildered – and somehow completely unable to get on top of the situation. After a couple of hours, the man and I had established a strange kind of intimacy. 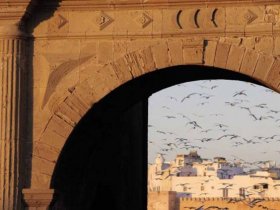 Of course, I eventually bought the mirror, but it wasn't a happy ending. He slunk away, shaking his head and muttering disconsolately; about daylight robbery perhaps? I went home with my unwanted purchase and a confused sense of humiliation.

A whitewashed house (Lawrence of Morocco)

So, it was with some trepidation that I pondered a return to the land of haggle and bargain. (My husband, by the way, is even more British-ly awkward about all this than I am.) On doing some research, however, Essaouira seemed to be quite a different proposition to Marrakech. Once a popular hippy hang out, the town was reportedly laid back, off the beaten track, and a prestigious Unesco World Heritage Site which many Moroccans visit as tourists. 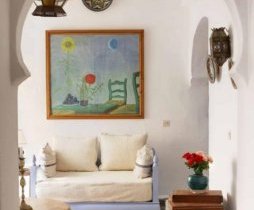 What is the date of moroccos independence?

What is the best season to travel to Morocco?

It depends what you are looking for.
I personally prefer travelling to Morocco in the late fall or early
spring (November-December, March-April). It is a little cooler
(usually around 17 C or 64 F, but some days will be a little
warmer), but with the change in temperature, places have thinner
crowds. My friend and I stumbled on a 25 C in early December and we
spent the day in Capo Negro (a beach on the Mediterranean about 20
mins from Tetouan). We were alone on the entire beach and because
it was the Mediterranean, the water was warm to the touch.
Most people like travelling in the summ…