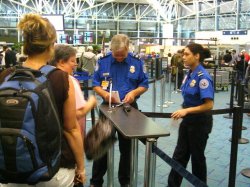 The TSA on Monday pulled the plug on its controversial but traveler-friendly Managed Inclusion Program, which allowed frequent travelers to use the PreCheck security lines at airports without paying the fee.

TSA had been allowing passengers deemed “low-risk” to use the expedited security lanes in order to speed up the security process. Passengers could save time—and money—if they were lucky enough to be cleared to use the PreCheck lanes without paying the $85 application fee.

Passengers in the TSA PreCheck line don’t need to remove shoes, belts, or light jackets and can keep laptops and 3-1-1 liquids in their bags. The program is available in more than 150 airports nationwide and most major American carriers participate, including American, Delta, and United.

The TSA in June said it would be phasing out the program over security concerns. A March Homeland Security report revealed that a convicted felon and former member of a domestic terrorist group using the Managed Inclusion Program had cleared the PreCheck lanes, though he was identified and re-screened before boarding the plane.

In April, Reps. Bennie Thompson, John Katko, and Kathleen Rice introduced the bipartisan Securing Expedited Screening Act in Congress, aimed at eliminating “serious security vulnerabilities” at airport screenings. The TSA then announced that it would phase out the program.

A TSA representative from Orlando International Airport, speaking off the record, confirmed that the program ended nationwide this week, saying: “It’s accurate in that we are no longer conducting a security process called Managed Inclusion ll. It allowed some travelers to have their hands tested while in line, in addition to other layers of security. They were then referred to the TSA Pre Check line. This process has been eliminated nationwide."

Travel agents might want to warn clients who are accustomed to using the PreCheck line that they will no longer be able to do so unless they officially enroll in the program, pay the $85 application fee, and complete an in-person interview at one of the 330 application centers around the country. Once a traveler is enrolled, PreCheck status is valid for five years.

What to Pack for Travel with Toddler.