Travel at the speed of change

Can You Really Go Back in Time by Breaking the Speed of Light?

Nothing can travel faster than the speed of light. But if it could, the conventional wisdom goes, it would travel back in time. Is the conventional wisdom right? Earlier this year, I was part of a team of researchers that decided to find out whether “superluminal” travel—that is, going faster than the speed of light—really does take you back in time. 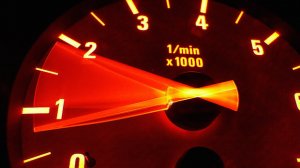 To find out, we imagined a souped-up spacecraft that could somehow go faster than the speed of light and sent it on an (imaginary) journey out to a distant planet and back again. We started the ship up at the speed of light—denoted in physics equations as c—then gradually hit the gas pedal, accelerating past the universal “speed limit” to see how long the trip took at various different velocities. We used only the velocity addition formula from special relativity, as the other ones (time dilation, length contraction, etc.) all gave us goofy, imaginary answers. (Also, those formulas apply to what’s going on inside of the spaceship, which is a whole other space-ball game.) We pictured what the trip would look like to an observer waiting back on Earth and watching the ship’s progress through a powerful super-telescope.

When the spaceship goes exactly at the speed of light, from the point of view of the observer back on Earth, everything appears normal as the ship speeds away. But just when the spaceship appears to reach the planet, it instantly materializes back on its landing pad on Earth, and the observer sees a huge flash of light containing an “instantaneous movie” of the spaceship’s trip back! Here’s why: imagine that it takes the ship ten years to get to the planet and ten years to get home. The light that the spaceship emits, say, five years into the journey will be seen by the Earthbound observer ten years after the ship took off, because it takes it five more years for it to get all the way back to Earth. Light the spaceship emits when it reaches the planet, ten years into its journey, makes it back to Earth twenty years after take-off. Now the ship turns around and heads home. As it gets closer to Earth, the light it emits has a shorter distance to backtrack. So, light from year 15 of the trip only has to travel for five years before it reaches the observer, 20 years after launch day. In fact, because the spaceship is “riding along” at the speed of light with the light it emits on the way back, the observer sees both the landed ship and the “movie” of its return journey, all at the same time, when it arrives back on Earth. Traveling at the speed of light, half of the journey appears to be instantaneous, but the ship hasn’t actually traveled back in time.

Managing at the Speed of Change

Teleportation or Travel at the Speed of Light?

constan velocity (is measured in meters per second)

I need help with a physics concept. Anyone up? | Yahoo Answers

what if in case of the VELOCITY of car, it is travelling at a uniform speed changes its direction? | Yahoo Answers

Acceleration means change of either velocity or direction or even both because its a VECTOR quantity...
a = (v2 - v1)/ time for change