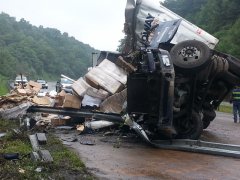 According to Virginia State Police Public Relations Director Corinne N. Geller, the accident occurred at 8:06 a.m. on today. Virginia State Police Sr. Trooper D.A. Phipps was called to the scene of a fatal crash in the southbound lanes of Interstate 77. The crash occurred near the 22 mile marker in Carroll County.

“The driver of the tractor-trailer, Randall O. Page, 36, of Charlotte, N.C., died at the scene, ” Geller said in a written statement. “The driver of the Aveo, a 22-year-old Ohio woman, was transported to Wythe Community Hospital for treatment of minor injuries.”

The cause of the crash remains ongoing.

The southbound lanes of I-77 have remained closed and will be for at least the next few hours due to the extensive cleanup of the tractor-trailer and its load, Geller said shortly before noon Friday. The Virginia Department of Transportation is assisting with detours for southbound traffic.