Does Traveler Beer Company Have the Answer to Pumpkin Beer's 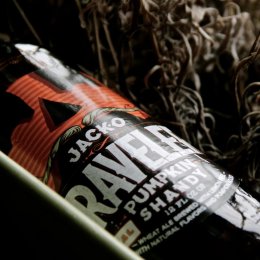 With a third of August already in the books, the summer is slowly fading into the autumn harvest season. Of course, that means you can expect a hefty serving of pumpkin spice in most food and drink options.

Last year, Traveler Beer Company’s much-anticipated pumpkin shandy, Jack-O Traveler, developed a cult following in select states. This year, beginning later this month and into the fall, the seasonal beer will be widely available for the first time ever throughout the United States.

While most fall seasonals are pumpkin-flavored ales, Jack-O Traveler remains true to the brand as a shandy. Made with real pumpkin and delicious autumn spices, Jack-O is a darker shandy with a great combination of bright refreshment and seasonal flavor.

Inspired by the old European pub classic, The Traveler Beer Company takes the traditional shandy and combines it with American craft beer innovation and passion. Rather than mixing ale with a fruit-flavored soda, Traveler’s craft American wheat beers are actually made with real fruit.