10 Ways to Survive a Long-Haul Flight 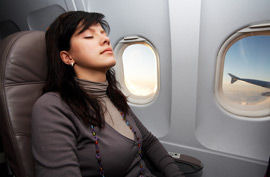 Hearing about a recent IndependentTraveler.com staff discussion concerning the world's longest flights made me remember my first true long-haul flight to Sydney, Australia, for the 2000 Summer Olympics. About six hours into the 15-hour flight, I was feeling strong and confident. I clearly remember thinking, "Six hours down, nine to go. No sweat, I got this."

Four long, boring hours later, it was a different story; you could have poured me into a bucket. "Five hours to go? I don't got this."

But get there I did. Unfortunately, that meant I had to get back as well, a flight on which I made a serious tactical error, which led to misery for me and entertainment for my friends on the flight - about which I will tell more in due course.

However, not all long-haul flights have to be miserable; on one direct flight from Tokyo to New York, I was nearing the end of a book I was enjoying immensely, and remember distinctly thinking, "No, no, just a little more time!" when the pilot told us over the in-flight PA that we had started our final descent. Here are 10 tips for preventing boredom, dehydration, deep-vein thrombosis, sleep deprivation and more so you can confidently say "I got this" the next time you are imprisoned in a metal tube for an entire waking day of your life. 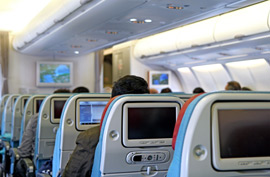 When traveling long-haul, you have no better friend on the planet than your frequent flier miles. On the Tokyo - Newark flight I was disappointed to see come to an end, I enlisted the help of my travel agent to find flights on which I could burn up all of my Continental miles to upgrade my entire trip. It meant catching puddle jumpers to my final destination in Japan (Gifu), but a couple of short extra flights were a small price to pay for 27 hours of first-class legroom, fully reclining chairs, edible meals, entertainment and breathing space.

If you stop reading at this point in the article, you almost need to know nothing more than this - by hook or crook, try to get an upgrade. (Even Dr. Timothy Hosea, from whom you will hear below, offered this as his first and most important suggestion.)

First Class for Free: How to Get an Airline Upgrade

You will want to have a rock-solid plan for frittering away several hours of your flight, and I don't mean working; staring at spreadsheets and writing proposals may burn up hours, but it does not make them vanish. You want these hours to disappear almost without a trace. Think headphones and Hollywood blockbusters. Getting a lot of work done is fine - rarely do you have 15 consecutive hours without a phone or email, so I encourage bringing some work - but work will fail you when you get to the brutal middle hours of this ordeal. Headphones and Hollywood; don't stray from this.

Spring for the airline's headphones, pay for and watch every movie, swipe your card for the DIRECTV, bring your iPad crammed with your favorite flicks - whatever it takes.

Nine Must-Dos Before a Long-Haul Flight

While checked baggage fees are inspiring travelers to carry on more and more stuff, on a long-haul flight this could burn you; anything that is under the seat in front of you just means less legroom and a more cramped living space for 15 or 16 hours. Don't bring so much on that you compete for your own sleeping space.

Long Flights - How to Travel in Comfort!

Travel Kit for a Long Flight

TRAVEL OUTFITS WHAT TO WEAR FOR LONG FLIGHTS!
Related Posts