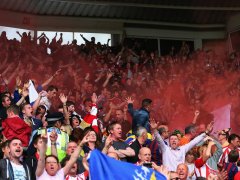 Stoke have announced they will be offering their supporters free coach travel to all of their Barclays Premier League games in the 2013-14 season.

The Potters are introducing the initiative - which they believe to be the first of its kind by any side in England's top four divisions for an entire campaign - on the back of the increase in their income delivered by the new television deals.

The Staffordshire outfit's chief executive Tony Scholes told "As a club we are conscious that following football can be an expensive business, especially at a time when so many people are feeling the squeeze financially.

"We work hard to try to provide our supporters with value for money which is why we have not increased our ticket prices since being promoted to the Premier League in 2008.

"However, we realise how expensive following the club away from home can be for supporters and we're delighted to be able to offer free coach travel and hope it encourages more of them to give us their fantastic backing away from home."

Coaches will leave from the Britannia Stadium for all 19 of Stoke's top-flight away matches over the season, starting with their campaign opener against Liverpool at Anfield on August 17.

Meanwhile, the club have confirmed the appointment of Dave Wright as their new academy director.

Wright, previously the Potters' academy manager and head of coaching and coach development, succeeds Terry Robinson, who left the club this summer to take up a role as Leicester's director of football.

Wright told "I am very much looking forward to the challenge.

"It's a great achievement what we have done so far and the important thing now is to maintain that category one status, but also at the same time ensure that we are in a position to produce good young footballers."

RT @AmazingMongolia: The Mongol #horse made it possible for the Mongols to evade intruders & retain their independence. #travel #history ht… Tue, 13 October 2015 01:34 AM