Travel by train across USA

Tales From A Train Traveling Across America 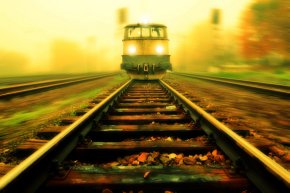 In the middle of the night, during the second leg of my train trip across the country, someone snatched my phone.

I was in route from Chicago to New York, half asleep but still conscious on a crowded car. I fought my disbelief and fumbled for my glasses. Two men had just walked down the aisle to the back of the train. I cornered them and my voice grew loud. I was sure I woke up the whole train. But as they protested, I worried that I was falsely accusing them. The train conductor I rushed to find was unhelpful, murmuring that he would check up after our next stop.

I borrowed a phone from a passenger and called my parents in the empty dining car. My voice broke when I tried to explain what happened. The absurdity and hopelessness of it all came out in sobs. A moment later, one of the men I suspected came into the dining car and sat across from me. Look, he said. I am really sorry about your phone. But it wasn’t me. I wouldn’t steal.

I tried to breath and feign calm. He was pale, with a face peppered with acne, tall and skinny in baggy clothes. He told me he had been through a lot in his life, that first his mother, then his father died recently. He was newly divorced. All he had left in the world was a sweet 6-year-old daughter, the only thing worth living for.

I don’t know why I’m telling you all of this, he said. I guess I just really wanted someone to talk to. It sounded like a line out of a movie. A moment in a short story. I wanted to believe him.

He took out a stack of crisp, hundred dollar bills from his pocket. He said the three hundred dollars were all he had left, but he felt so bad that he offered to give me the last of his money.

I said no. I have to go, I told him. I went back to my seat. I was crying again. The British man next to me offered me tissues, and his kindness made me feel worse.

I was more upset than I should have been over a phone. But it was three AM in a narrow dark compartment, and everyone around me seemed a possible suspect. I had given up.

The man from the dining car came back, unexpected. He began to accuse my neighbor passenger of stealing my phone. He was drunk and belligerent, yelling tense, frightening insults at my neighbor, who stared back at him with cold eyes. He was provoking my neighbor to fight. I wanted it to be over, for him to go away.

He did, finally, with his hands in his pockets, still muttering curses. I was afraid he would pull out a knife. I didn’t expect him to come back with the conductor, who took my neighbor away for a talk, and then came back for evidence from the rest of us. He collected signatures on a notepad, testimony that the man from the dining car was the one who instigated it all. When the train stopped at the next remote, upstate New York station that wasn’t his destination, the man was escorted off.

The conductor returned to our car. He dropped my phone and my earphones, still wrapped around it, on my lap. He confessed, the conductor said. Or, he hadn’t confessed, exactly — he said he said he saw my neighbor, the one he provoked, throw the phone into the trash, in the narrow alcove at the back of the car where I first accosted him. My phone smelled like cheap, packaged train food. But it was functional, mine again. The entire car clapped.

How to Travel Through Europe by Train Video - About.com

is there a train that travels coast to coast across the USA? | Yahoo Answers

Well, yes, but it takes several days and you'd undoubtedly have to change trains in Chicago, which isn't a bad thing. Train travel in the US isn't as easy or convenient as it is in Europe. The Amtrak website has info. There may be special passes/tickets available to you, as a foreigner. There is also a ticket that allows for stopping over, I think three times, during your journey.

Train travel across USA and Canada. What's it like? | Yahoo Answers

Trains in the US are nice, almost as nice as continental European trains, but pricey (maybe not now with the dollar so weak).
The northeast Corridor (Miami up to Boston, and as you identify, Toronto) is pretty good - remember that Toronto is not the same country as the US, nor is Vancouver, and there is a border crossing that is not as minor as the EU. I think at least on the west coast, the border is actually by bus.
Check out the web sites below for details. Note that there are many low fare airlines in these areas - that said, the train will let you see more of the country.
There …