As part of the commemoration of the 100th anniversary of the Armenian Genocide, “Digging into the Future–Armenia” will premiere on select PBS stations in April. Hosted by Joseph Rosendo, “Digging” is produced by the Emmy Award-winning team behind the PBS series, “Joseph Rosendo’s Travelscope.” 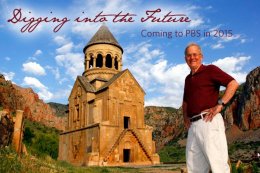 Rosendo joins archaeologists from UCLA’s Cotsen Institute of Archaeology on a journey through Armenia. During this archeological adventure, he crisscrosses Armenia to ancient sites where some of the world’s oldest artifacts have been discovered. Every site offers viewers insights into how the Armenians of the distant and near past lived.

In keeping with the show’s focus on cultural connections, Rosendo meets modern-day Armenians in roadside fruit stands, riverside wine stalls, and bustling markets, and is welcomed into their homes to witness traditional artisans at work, and to join in religious and communal celebrations that inspire, enlighten, and reveal the Armenian heart and soul.

The Armenian Genocide is also covered in the show and illustrates the resiliency of the Armenian people.

Travelscope, LLC thanks UCLA’s Cotsen Institute of Archaeology for its academic advice and coordination on the production. Local broadcasts are made possible in part by the Armenian General Benevolent Union and the Kazanjian Foundation.