The culture of the Geisha originated in Japan, where they are seen as symbols of culture and grace, full of puzzling mystery. They are entertainers who can be employed as hostesses for parties and other events, whether formal or informal. 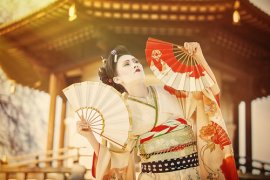 The origin of the Geisha dates back roughly 1500 years and over that time, some of their skills have adapted in parallel to modernism. Typically a Geisha will perform a range of duties and their most well known skills include dancing, classical music and a number of games. Present day Geisha continue to reside in traditional Geisha houses known as Okiya, and traditional instruments such as the drums, shakuhachi and shamisen are still practiced today.

Geishas of the present era are still expected to master traditional songs and poetry as well as the art of calligraphy. Many Geishas still attend the Hanayagi school to master the art of Buto, a traditional Japanese dance. In the early days, Geishas would begin training from the age of around 4, however in modern times, training will begin during teenage years.

1. Geishas use safflower lipstick to colour their lips red and add sugar to create a shine.

2. The mother of a Geisha house is called an Okasan. She is responsible for the education and the career of the Geishas of the house.

3. It can take up to two hours (or even more) for a Geisha to get all ready.

4. Geishas are paid according to time consumption.

5. Apprentice Geishas will dye their teeth black before becoming a fully qualified Geisha.

6. A Geisha’s kimono can take up to three years to manufacture.

7. Many Geishas prefer not to wear any kimono more than once.

8. Traditional Geisha hairstyles can cause the hair to recede. This is why wigs are commonly worn by many Geishas.

9. Many gestures performed by Geishas have a hidden meaning.

10. The first Geisha were actually men, and they were known as Honko.

Although technology and social media have had an important impact on the Empire of Japan, many Geisha prefer not to evolve with modern times. Apprentice Geisha are not permitted to use mobile phones, however they keep up to date with current affairs including economy and politics by digesting the daily newspapers.

Fun Facts About Canada (You May Not Know...)

What is the fun fact of earth?

Did you know that the Earth is the only planet out of the eight which is not named after a Roman or Greek god? Not much fun I know, but a good one to impress your friends with.