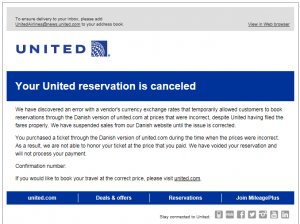 Hawaii flights for $7, tickets to Europe for $20 plus tax, a flight to Belize for $58 roundtrip. They are the stuff of airline urban legend — mistake fares that pop up for a couple minutes or hours, then vanish into cyberspace.

The rush of booking one of these fares is palpable. Is it real? Am I really going to go to Barcelona for $250 roundtrip? Can I book this before the airline figures it out?

These “mistake fares” often seem too good to be true. And they usually are — whether it’s a data entry error, a misplaced decimal point, a roundtrip flight for a one-way price, a currency exchange issue or any combination of factors that go into filing and distributing airfares from spreadsheet to booking system.

A cottage industry has grown up around these mistake fares with Internet chat rooms, Twitter feeds with cult followings and intrepid travelers ready to fly just about anywhere for just about nothing. With the community mantra of “tell everyone you know but the airline, ” one of these mistakes can quickly turn into hundreds or thousands of tickets sold at a fraction of the market price.

Previous guidelines from the Department of Transportation (DOT) prevented airlines from raising the price on tickets after purchase — essentially forcing airlines to honor these mistake fares.

On May 8, those rules changed.

In a reversal of the previous policy, airlines can — provided they can prove to the DOT that the fare was filed incorrectly. Airlines also need to reimburse travelers “who purchased a mistaken fare ticket for any reasonable, actual, and verifiable out-of-pocket expenses that were made in reliance on the ticket purchase, in addition to refunding the purchase price of the ticket.”

The straw that likely broke the camel’s back was $51 first-class transatlantic flights on United.com this year, if the traveler purchased the tickets from the Danish version of the United website in Danish Krone. United blamed the fare on a software glitch from a third-party vendor and canceled the tickets for the, citing the “bad faith” action of consumers and the fact that the fare wasn’t marketed to U.S. travelers.