Travel Vests with pockets for Women 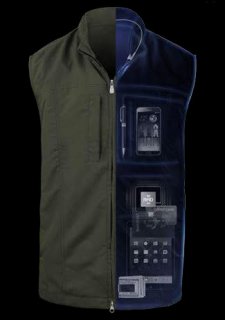 Scott Jordan has been designing and selling multi-pocketed clothing for over a decade. His products are doubly distinctive – for having so many pockets in them, and for having a clever way of routing wires for electronic devices through them too. In addition, he guarantees his jackets as being pickpocket proof (if you carry things in an inside zipped up pocket).

I’ve written about Scott’s products several times in the past, and with particular delight when recounting his falling out with airlines after his recommendation that travelers save excess (or any/all) baggage fees by packing everything they’re traveling with into one of his jackets or vests and carry it on to the plane for free.

It is a strategy I’ve used myself on occasion when confronted by airlines with unfairly low weight restrictions on either (both!) carry-on and checked bags, and Scott got further mileage out of the concept by sponsoring a travel writer on a round the world journey, traveling only with what he had packed into his Scottevest jacket. Could you travel around the world with nothing more than what you can fit in your jacket pockets? Probably not – unless you too have a Scottevest jacket.

I’m often to be seen traveling with my Scottevest jacket. While I don’t fill all of its capacious pockets to the brim, all the time, it can be wonderfully convenient, especially during a day of sightseeing and buying occasional souvenirs and knick-knacks. I can fill my pockets rather than burden my hands with bags.

Scott has just come out with his latest product. It is similar to his other vests, but has a special new feature – a shielded RFID blocking pocket in which you can place your passport and any other RFID enabled items. It is a roomy pocket, so you can safeguard additional passports for your traveling companion(s) too, and in my case, I’ve put my entire billfold in there as well as my passport and Nexus card.

RFID Blocking and Why it is Important

In case you haven’t been following the debate over RFID enabled passports and other identification products, there is credible concern that malefactors could trigger the RFID responder in your passport and read its data, and potentially from quite a considerable distance. While the US government assures us this is not possible, and even if it were possible, the data retrieved from a passport’s RFID chip would be meaningless and useless, not everyone accepts their attempts at reassurance. Even if it were true that your passport is secure, what about the various other RFID enabled products (such as credit cards or an enhanced driver’s license) you might also be traveling with?

RFID readers are readily obtainable and inexpensive. There are even online guides showing people how to build one themselves. So while this might seem like a high-tech and improbable type of risk, it is much easier to exploit than you’d think.

@The Solo Stories: Thoughts on women travelling solo in #India? Have you been or would you consider going? #solofemaletravel #solotravel #femaletravel #travel Mon, 12 October 2015 08:52 AM

Thanks for the follow @digi_catalyst Please RT our #womenBeBo solo #Women #travel from #DelhiToLondon Wed, 14 October 2015 04:04 AM