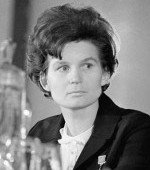 Travel takes us out of our comfort zones. It forces us to learn hard lessons about ourselves and the world around us. Even the most nomadic soul will struggle while navigating new and unfamiliar territory. Women have been traversing the globe and seeking adventure for centuries. Early pioneers include Jeanne Baret who was the first woman in recorded history to circumnavigate the globe in the 1760s and Cheng I Sao who was born in 1775 and in her heyday commanded over 400 pirate ships. Let’s take a moment out to appreciate some words of wisdom as spoken by courageous trailblazing women.


“If women can be railroad workers in Russia, why can’t they fly in space?” - Valentina Tereshkova

Born in 1937 in western Russia, Tereshkova was the first woman in space. By the time she was 24 she had become an expert at parachuting and was the only female candidate for the Russian space program that wasn’t a pilot.


“The real work of an expedition begins when you return.” – Louise Arner Boyd

A Californian native, Boyd’s nickname is “ice woman” due to her multiple explorations to the arctic. After decades of arctic journeys, in 1955 at the age of 68, Boyd became the first woman to fly over the North Pole.

Londonderry was born in 1870 in what is today Latvia and moved to the United States as a child. After getting married and having three children, Londonderry hopped on a bicycle in 1984 and became the first woman to cycle around the world.

“Surely one advantage of traveling is that, while it removes much prejudice against foreigners and their customs, it intensifies tenfold one’s appreciation of the good at home.” – Isabella L. Bird

Bird was born in 1831 in Yorkshire, England and took her first big voyage in 1845 when she took a trip to America. She wrote about her many international adventures and was a well-respected photographer and naturalist. In 1892 she became the first woman member of the Royal Geographical Society.

Ronald Reagan: 10 quotes on his birthday - Men and women ...